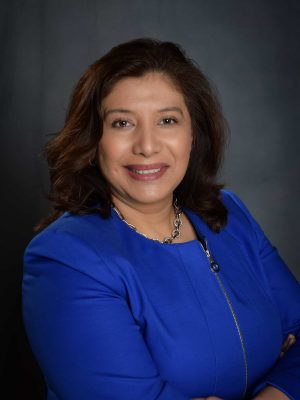 Maria del Socorro Pesqueira was appointed President of Healthy Communities Foundation in May 2017. She is an award-winning visionary leader and sought-after speaker on topics from health inequities to the future of philanthropy. Her civic and community involvement includes nonprofit board appointments at Forefront Illinois, Hispanics in Philanthropy, The Shriver Center on Poverty Law, and Grantmakers in Health.

As the eldest daughter of Mexican immigrants, she became a translator, advocate, convener, and bridge for information and understanding at an early age. As a result, justice, equity, and collaborative effort have been her drivers for becoming a passionate servant-leader.

Before being President of the Healthy Communities Foundation, Maria served as President of Mujeres Latinas en Acción, the oldest Latina-led organization in the US that offers culturally affirming services to Latinas and their families as they heal from domestic violence. She also was the Development and Marketing Lead at The National Museum of Mexican Art, one of the most prominent first-voice institutions for Mexican art and culture in the US.

She serves on the boards of Forefront, The Chicago Network, Shriver Center on Poverty Law, Hispanics in Philanthropy, Adler University and Grantmakers in Health. Maria’s other civic and community involvement has included appointments to the United States Congressional Commission for a National Women’s History Museum, the Lincoln Academy Advisory Board and Community Memorial Foundation Board Emeriti.

Her awards and recognitions include being named a Chicago Community Trust Fellow, a Leadership Greater Chicago Fellow, a Women of Influence by Chicago Business Journal, the Excellence in Community Service award by MALDEF, and the Making a Difference Award by Chicago Women in Philanthropy. Maria was selected to participate in the AJC Project Israel Interchange for National Latino Opinion and Policy Leaders in 2016 and named “40 under 40” by Crain’s Chicago Business.

Along with her husband and son, Maria resides in the region the Healthy Communities Foundation serves, a few blocks from where she grew up.

FEATURED ARTICLES ABOUT AND BY MARIA:

A Reimagined World: Walking With Community